While there are many different types of dogs to choose from, some breeds are more popular than others as pets. German Shepherd is known for being loyal, friendly, and good with children. They are also relatively easy to train and tend to be active, making them ideal for families who enjoy spending time outdoors. Golden retrievers share many of the same qualities as Labradors, but they are also known for being gentle and calm. They make excellent companions for people of all ages and can provide years of enjoyment. Whether you’re looking for a family pet or a loyal friend, there’s a good chance you’ll find what you’re looking for in a German shepherd.

If you are planning to get a pet dog and are not sure about which one is better then you may try getting a German shepherd. Here is all the information you might need to know before adding one to your pet hub.

German shepherds are the most loved breed of dogs in the United States. German shepherds were originally bred in Germany in the late 1800s for herding sheep. Today, they are commonly used as police and military dogs, as well as service dogs for the disabled. German shepherds are large dogs, typically weighing between 60 and 80 pounds. They have a strong, muscular build and a thick coat of fur that can be either black and tan or all black. German shepherds are devoted to their families and make excellent guard dogs. They require a lot of exercise and training, but they are intelligent and eager to please, making them relatively easy to train. German shepherds typically live 10-12 years.

In the late 19th century, a German breeder named Captain Max von Stephanitz set out to create the perfect working dog. His foundation stock was a mix of old German herding breeds, and the resulting dogs were prized for their unique individual traits especially friendliness and strength. Over the years, these dogs came to be known as German Shepherds, and they quickly became one of the most popular breeds in the world. Today, German Shepherds are still prized for their versatility and trainability, and they continue to play an important role in law enforcement, search and rescue, and other vital occupations. Despite their modern-day popularity, German Shepherds are still evolving. Von Stephanitz himself was an early advocate of selective breeding, and his methods have been refined over the years by professional breeders. As a result, today’s German Shepherds are even more intelligent and trainable than their predecessors. They also boast superior health and athleticism, thanks to efforts to eliminate genetic abnormalities from the breed. With their all-around excellence, it’s no wonder that German Shepherds remain one of the most popular dog breeds in the world.

The German Shepherd is a large and powerful dog breed with a noble appearance. They are strong and muscular, with a thick coat of fur that can be either short or long. German Shepherds are most commonly black andtan, but they can also be all black, all white, or liver-colored. They have pointy ears and a long, bushy tail. German Shepherds are loyal and intelligent dogs, and they make excellent guard dogs and loyal companions.

German Shepherds typically weigh between 50 and 90 pounds, with females usually on the smaller end of the spectrum. Males can range from 24 to 26 inches tall at the shoulder, while females are usually 22 to 24 inches tall. Despite their large size, German Shepherds are relatively agile and athletic dogs.

German Shepherds come in a variety of colors, the most common being black and tan. Other popular colors include solid black, all white, liver (a dark brown), blue (a grayish-brown), and sable (a reddish-brown). The Rare colors are white with black patches (panda german shepherd) and all-black. German shepherds can also have markings of white on their chest and toes. Even though some kennel clubs consider black and tan to be the only true colors of the German Shepherd, the rarer colors are starting to become more accepted. Panda German Shepherds, for example, are gaining popularity as show dogs and family pets. Regardless of color, all German Shepherds are intelligent, loyal, and obedient dogs that make great companions. 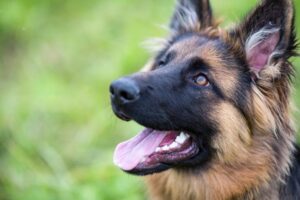 There are three types of German Shepherds: the American type, the European type, and the Mix type.

German Shepherds are loyal, protective, and intelligent dogs that make great companions. They are also one of the most popular breeds, thanks to their versatile nature. German Shepherds can be trained to perform a variety of tasks, including herding sheep, guarding property, and working as service dogs. Because they are so intelligent, German Shepherds often excel in obedience trials and other dog sports. However, their intelligence can also lead to boredom if they are not given enough stimulation. German Shepherds need plenty of exercises and mental stimulation to stay happy and healthy. Without it, they may become destructive or anxious. If you’re considering adding a German Shepherd to your family, be prepared to provide plenty of love and attention. With proper care, your German Shepherd will be a devoted friend for life.

German Shepherds are one of the most popular breeds of dogs, and it’s easy to see why. However, they are also high-maintenance dogs that require a lot of care and attention. If you’re thinking of getting a German Shepherd, here are some maintenance tips to keep in mind:

If you’re prepared to put in the time and effort, a German Shepherd can be a great addition to your family. Just be sure to keep these maintenance tips in mind!

Depending on their parentage, training, and overall usefulness, German Shepherds can cost between $500 and $5,000. A show-quality dog from a breeder who has won multiple competitions can cost as much as $5,000, while a Shepherd that hasn’t been bred for specific traits or working abilities might only cost a few hundred dollars. The price of a German Shepherd also depends on whether you want a male or female dog. Generally, males are more expensive than females. If you’re interested in purchasing a German Shepherd, be prepared to pay anywhere from $500 to $5,000.

The German Shepherd is an intelligent, versatile breed that excels at a variety of tasks. They are loyal and protective of their family, yet gentle and loving with children. They are also highly trainable and are often used as working dogs in a variety of settings, including law enforcement, search and rescue, and assistance for the disabled. German Shepherds are an active breed that requires regular exercise, but with proper training and socialization, they can be calm and well-behaved indoors. Whether you’re looking for a dedicated companion or a versatile working dog, the German Shepherd is an excellent choice.