Malamute vs Husky: All 5 Differences Explained

Alaskan Malamutes Vs Husky were originally bred for sledding, and they remain excellent working dogs. They are also known for their loyalty and affection, which make them great companions. However, malamutes can also be stubborn and independent, which means they require patience and firmness from their owners. If you’re thinking of adding an Alaskan malamute to your family, it’s important to do your research and make sure you’re prepared to provide the care and training that this breed needs. With the right owner, an Alaskan malamute can be a loving and faithful friend for life.

Huskies are a type of dog that is known for their thick fur coats, which helps protect them from cold weather. They were originally bred in Siberia and are still used today for dogsledding. Huskies are also popular pets, and they are known for being friendly and good with children.

Are Malamutes And Husky The Same? 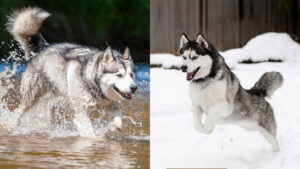 Malamutes and huskies are both breeds of Arctic dogs, but there are some important differences between them. Malamutes are larger and heavier than huskies, with a thick coat of fur that helps to protect them from the cold. They are hard to handle when it comes to training. In contrast, huskies are smaller and lighter, with a thinner coat of fur that allows them to run faster. They are also much more social animals, and they generally enjoy being around people. As a result, huskies are generally considered to be better pets than malamutes. However, both breeds make excellent working dogs, and they will gladly pull a sled or pack through the snow.

If you want to choose any of the two then you need to learn about their differences so you can choose the one that is closest to your pet’s choice. Here in the articles, we have tried to put forth the distinct qualities of the two.

Differences Between Husky And Malamutes 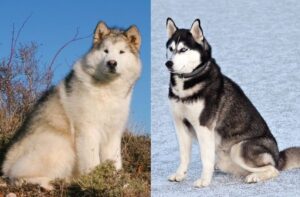 Do you love the outdoors? Are you looking for a dog who will be able to keep up with your active lifestyle? If so, you may be wondering about the differences between huskies and malamutes. Both of these breeds are Arctic dogs, but they have different personalities and needs. So, which breed is right for you? In this blog post, we will discuss the key differences between huskies and malamutes so that you can make the best decision for your family!

Huskies are known for being friendly and outgoing. They are sociable, friendly, and intelligent. Huskies need a lot of exercises, so they are not the best breed for families who live in apartments or who do not have a lot of time for walks.

Malamutes, on the other hand, are not as social. They prefer to be around their family and maybe shy around strangers. Malamutes are also very independent and stubborn. They are not as easy to train as huskies, but they are still intelligent dogs. Malamutes need less exercise than huskies, so they may be a better breed for families who live in apartments or who do not have a lot of time for walks.

When it comes to diet, there are a few key differences between mamalutes and huskies. For one thing, mamalutes are strictly carnivorous, while huskies are omnivores. This means that huskies are able to digest plant matter, which provides them with essential nutrients that mamalutes lack. Huskies also tend to eat smaller meals more often throughout the day, while mamalutes typically have one large meal per day. This difference in eating habits is likely due to the fact that huskies have a higher metabolism than mamalutes. Finally, huskies typically require more calories than mamalutes, due to their high activity level. As a result, it is important to make sure that huskies have access to a nutritious and well-balanced diet.

When it comes to size, there are certainly some differences between mamalutes and huskies. Mamalutes, also known as mastiffs, are much larger than huskies, with some breeds weighing in at over 200 pounds. Huskies have a weight between 35 and 60 pounds. In addition to their size difference, mamalutes also have a longer lifespan than huskies, with some living for 10 years or more. However, both breeds are known for being intelligent and loyal companions. So, whether you’re looking for a giant cuddly friend or a smaller furry companion, a mamalute or husky might be the perfect fit for you.

There are many similarities between mamalutes and huskies in terms of their appearance. Both breeds have erect ears, thick coats, and long tails. However, there are also some key differences. Mamalutes are typically larger than huskies, with shorter snouts and sturdier build. Huskies tend to have a more wolf-like appearance, with longer legs and a leaner body. Additionally, huskies typically have blue or brown eyes, while mamalutes can have a variety of eye colors. While both breeds make excellent pets, potential owners should research the breed that best suits their lifestyle and needs.

On average, mamalutes live for 12-15 years, while huskies typically have a lifespan of 10-12 years. So if you’re looking for a pet that will be by your side for the long haul, a mamalute may be the better choice. Of course, this is just one factor to consider, and there are many other things to take into account before making your final decision. But if you’re looking for a pet with a slightly longer life span, a mamalute is worth considering.

Which One Is Better? 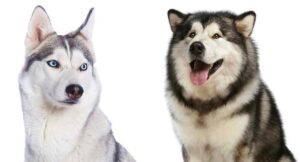 Malamutes and huskies are both popular dog breeds known for their endurance and loyalty. Both breeds are also considered to be high-maintenance, as they require a lot of exercise and attention. The two breeds vary in several ways. Malamutes are generally larger than huskies, with males weighing up to 100 pounds. Huskies, on the other hand, typically weigh between 35 and 60 pounds. Malamutes also have a thicker coat of fur, which makes them better suited for colder climates. Huskies, on the other hand, have a thinner coat of fur that is more suited for moderate climates. In terms of personality, malamutes are often described as being more independent and aloof than huskies. Huskies, on the other hand, are typically more friendly and outgoing. Ultimately, the best breed of dog for you will depend on your individual preferences and lifestyle.

How Much Are Labrador Puppies?